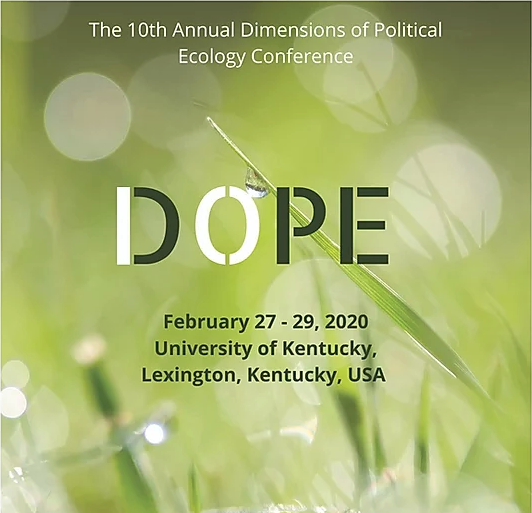 Rebecca Elmhirst opened the 10th Dimensions of Political Ecology (DOPE) conference at University of Kentucky with a presentation entitled Beyond handbook tyrannies: Pluralising the practice of feminist political ecology.

Her talk introduced the work WEGO is doing to consolidate Feminist Political Ecology as a body of work and ethical approach to research and practice to an audience of largely North and Latin American-based political ecologists, many of whom are early career scholar-activists.

DOPE was started by and continues to be run by the Political Ecology Working Group, an interdisciplinary collective of University of Kentucky graduate students. The conference in February 2020 included a superb range of panels and papers from across a range of political ecology areas, but with a strong emphasis on intersectional scholar activism, including close engagement with environmental activisms in Kentucky and Appalachia. Insights were shared through a plenary panel where Justin Dunnavant presented his action research with young people recovering histories of enslavement in the land and seascapes of the former Danish West Indies, Macarena Gómez-Barris presented on extractivism in Chile and Diana Ojeda described her recent projects bridging political ecology and feminist geopolitics with research focused on the Colombian Caribbean. Dr Alaka Wali, Curator of North American Anthropology in the Science and Education Division of The Field Museum gave a keynote addressdescribing her pioneering work developing of participatory social science action research and community engagement processes based in museum science to further access of museum resources for excluded communities. Her talk was part of the University of Kentucky’s year of equity programme to mark the 70th Anniversary of the successful lawsuit to desegregate the University of Kentucky.