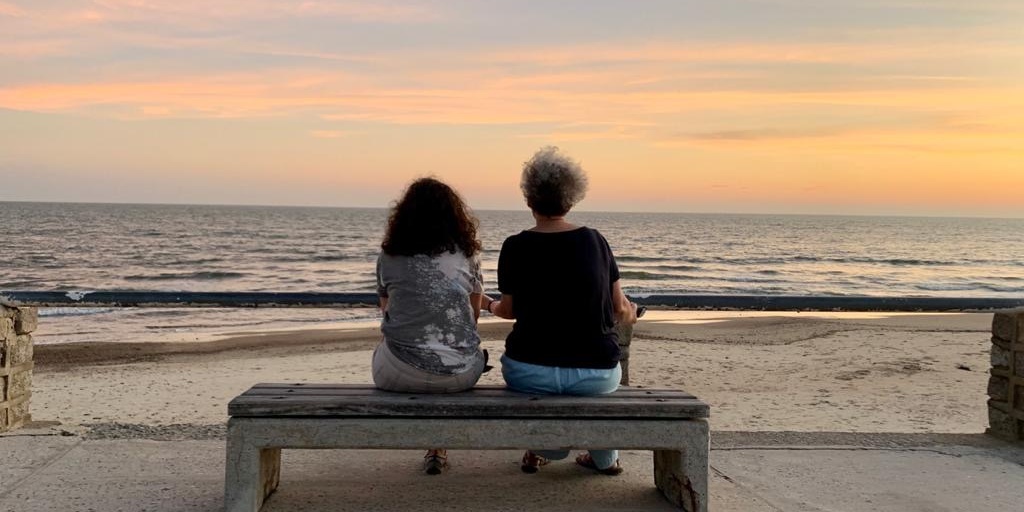 This last (for a while) beautiful sunset of freedom. Photo: Constance Dupuis

Looking at these four photos now, taken when I was visiting Ana Agostino and Constance Dupuis in Montevideo Uruguay March 6-13 it seems a life time, not just two weeks ago. My visit included what today would be an unthinkably risky schedule. Together with Ana and Constance (and our partners) on 7 March we attended the opening of the Plaza Las Pioneras, a collective feminist space mingling with 100s of people in a joyful celebration of reclaiming disused space for feminist arts and culture and politics. On 8 March we were marching with 350,000 people through the centre of Montevideo singing, chanting. I admired all the energy and vision around me. In all these encounters I was constantly being introduced, hugged and kissed. We washed our hands but we were free of the omniscient presence of the Corona virus in our daily life, though it was there in the messages from Italy (where my daughter and others in WEGO were on lockdown) and of increasing worries about what if it were to spread?

During my visit I went to the Universidad de la República de Uruguay, Montevideo (UdelaR) and the Defensoria de VyV de Montevideo  to discuss the WEGO project and Constance’s project on ageing and to give a talk on Feminist Political Ecology and development dilemmas organised by Javier Taks at the Social Science faculty. More informally, I joined a dialogue with feminists of all ages at the Cotidiano Mujer about feminist political ecology and eco-feminism. I was poised to go on with Ana and Constance to Buenos Aires to meet more feminists in academia and government, when the impact of COVID-19 abruptly hit. Just the day before leaving for Buenos Aires we were informed as I had been in Italy less than two weeks ago, I was not allowed into Argentina, and it rapidly became clear that foreigners were going to be asked to leave Uruguay.

Now we are in the reality of Corona times it seems incredible how much I could do in that week in Montevideo, and what I took for granted. We could walk, chat, hug, enjoy dinners together, greet and kiss strangers, sit together on crowded buses, visit museums and even go to a Tango concert.

These photos capture those last tranquil moments, as well as the deep friendship and respect I have for Ana Agostino who hosted me. I have known Ana for well over a decade. We share our feminism, our passions and our network of friends overlap. I use her writing on climate justice and post development for my classes, and have been inspired over the years by her on-going commitment to human rights, environmental justice and feminism. I am so pleased she has accepted to be Ombudsperson for WEGO bringing her 5 years of experience of being Ombudsperson at the Defensoria in Montevideo and vice president of Latin America Ombudpersons.

These photos were taken by Constance in Montevideo and also at La Flores – a seaside area we visited just before I went to the airport. It was here amongst the sea, the flowers and birds that I shared some needed quiet time with Ana and enjoyed this last (for a while)  beautiful sunset of freedom.