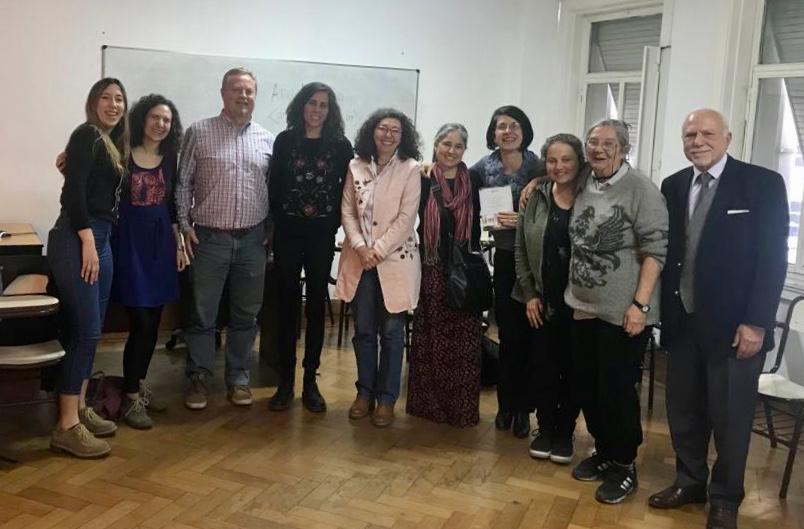 Ana Agostino was invited to a meeting at the University of San Martín in Buenos Aires, where Ana Ines Heras, from CERN network invited  her to talk on her work at the Defensoría and exchange on post development and feminist political ecology. A very interesting debate took place.

Within the framework of the Collaborative Research Programme Learning from and about Self-Managementand in agreement with the Institute for Social Inclusion and Human Development (INCLUIR), a meeting took place on September 27 at the University of San Martín in conversation with the former Public Protector of Montevideo*, Dr Ana Agostino.

The objective of the meeting was to exchange on projects associated to the research programme, on the framing of Community Economies, and on the activities implemented during the five years in the Defensoría in connection with her work as a researcher in different geographies of the world.

The topics presented as motivation for the exchange included a presentation on the Public Protector’s Office itself, its background, mandate, institutionality and strategies; the challenges presented by an intercultural approach to Human Rights; the concept of hospitality within the framework of a critical view of development and as a notion that allows other ways of being and doing in the world to be made visible and valued; the theoretical contribution of post development and feminist political ecology. In addition, several examples of concrete contributions to public policies were analysed, with an emphasis on sustainability, care, non-discrimination and citizen’s participation.

During the exchange, tensions were identified linked to the agency of several of these policies, the capacity for coordination between different actors, diverse imaginaries conditioned by culture, socio-economic factors, gender, identities, and institutional frameworks, among others. In general, the role of Public Protectors was valued as spaces for participation and the strengthening of democracy, leaving open the possibility for further debate on their institutional frameworks and possible mechanisms for greater citizen involvement.