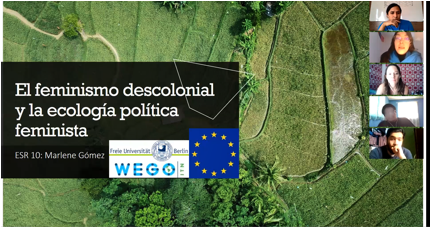 Marlene Gómez presented the theme: “Decolonial Feminism and Feminist Political Ecology” in the seminar “Philosophy and Science” of the Earth Sciences career at the National University Autonomous of Mexico last 5thof May 2020.

During this session a brief introduction was given to the waves of feminism, black feminist thought, intersectionality and the matrix of power theory to later explain the decolonial feminism of Latin America and how Feminist Political Ecology can contribute to it. The speaker explained that decolonial feminism is an ontological and epistemological framework that seeks the decolonisation of power from a world-system perspective, which authors such as Yuderkis Espinosa, Ochy Curiel, and Margara Millán mention is based on the imposition of a modern, Eurocentric, patriarchal and colonial capitalist thought. Feminist political ecology in this context could help us to understand the power relations that exist between nature and the patriarchal structures that constrain the free access and transformation of nature, as well as the depredation of nature and territories in hands of foreigner companies. It was conclude that a permanent critique of the academy would allow a transition to an ontology and epistemology more sensitive to social problems and would give voice and space to other knowledge that is produced from a bottom-up perspective or a community-based one.