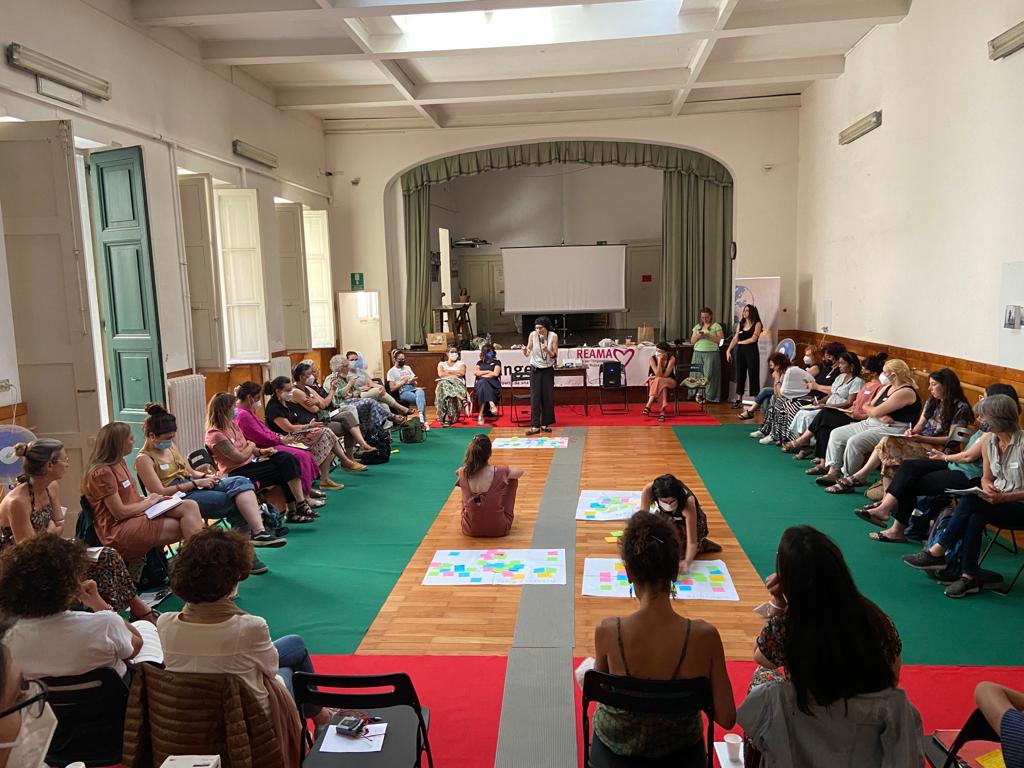 Rome, 17 June 2022 – Pangea Foundation and WEGO-ITN organized the “Wangari Maathai” workshop in collaboration with the association A Sud. The aim of the event was to create a space for women working in different fields linked to feminism and ecology to come together and exchange experiences, practices, knowledge and opinions.

Women activists, entrepreneurs, politicians, researchers met and created new nexuses between theories and practices, new definitions and possible actions. Around 40 women working on gender and the environment participated in the workshop (take a look at some of their bios below), some coming from different parts of Italy and abroad. Participants presented and positioned themselves and shared their definition of ecofeminism.

They shared how they stood with respect to their struggles, their territories and themselves. They searched for new words and meanings, exchanged practices and identified those in which they recognised themselves the most.

The workshop was an opportunity for all participants to gather, meet new people, find new energy and connections to act collectively for environmental and gender justice.

Rather than speeches the workshop was based on encounters facilitated by the A Sud team using participatory workshop tools that enabled participants to share their stories and listen to others. The workshop began with everyone writing down their definition of eco feminism, and then in different groups fears and hopes.

English and Italian translation was provided so that everyone was able to share their story and thoughts about their struggles as well as in-depth discussions of ecofeminism, body, territory and practices for change.  There were fascinating stories of how different members of A Sud, whether farmers, students, home makers or precariously employed, have organised political resistance with the communities to counter problems of waste, unsafe water, cancers and food contamination.

The open and inclusive nature of the meeting with frequent moments for debate, allowed people to raise practical and strategic issues that were both specific to a territorial struggle and common to all ecofeminist concerns and campaigns. There was an interesting but productive tension around whether activists can or should work with the state when the Major of Assisi addressed the meeting via Zoom. Some participants felt it was not possible to work with political parties and with the state system as it leads to a watering down of concerns, to compromise and even to cooptation. Others argued for the usefulness of the insider-outside strategy and the need for recognition by the state and they welcomed possibilities to engage in the cracks in the system by working with officials who were open to support feminist strategies. The afternoon was devoted to a sharing grassroots strategies looking at what worked and how to learn from each other’s insights, bringing the knowledge of different places together, for example how, as an ecofeminist to engage non-politicized neighbours in defense of territory.

The atmosphere of the meeting, held in Pangea’s spacious theatre/room, was positive and encouraging about what such networking could achieve not only in Italy but in other places where WEGO is working. The positive vibe was helped by the careful preparation of A Sud and Pangea in the inclusive and constructive dialogue. The hospitality and discussions were very much appreciated by the members of WEGO as it covered both theory and practice, in a practical hands-on way that enabled in-depth debate and learning even in such a short time. The lovely surroundings, the friendliness, and the delicious eco-food provided by Pangea as well as the translation, ensured a very enjoyable exchange.