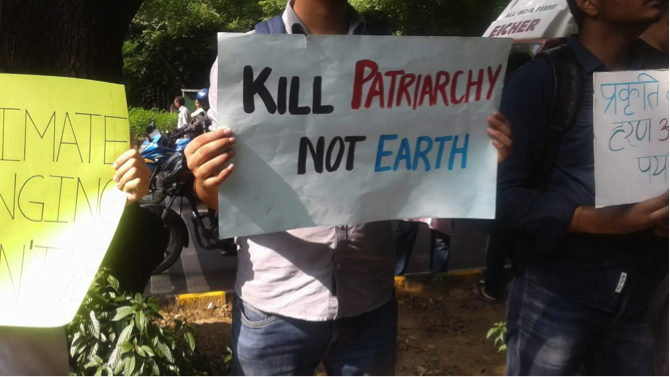 At the climate strike in New Delhi. Photo: Christian Eichenmüller

Taking the short taxi ride from my Airbnb apartment in Jangpura to the Indian Habitat Centre on Lodhdi Road, watching the blurred streets pass in the heat of the morning sun, cushioned in the faux-leather seats, cooled by air-conditioning, the full embodiment of my privilege flows over me, in its familiar way.

Arriving at the Indian Habitat Centre for the biannual RC21 Conference, I move through security into the main hall for the introductory plenary. Already twenty minutes late, I slip in the side door and stand with my back to the wall. I’m familiar with the setting. Rows of chairs, a stage with five people sat behind a long table facing the silent, attentive audience, powerpoint in action. I see a friend, he sees me, we smile and nod.

Three days pass in a similar fashion. Panel sessions are punctuated by the ritual consumption of coffee and food, with the compulsory brief introductions and ‘networking chat’ echoing across the spaces. Finding refuge with friends takes the edge off but I can’t escape the feeling of unease that accompanies me as I move between cooled carpeted spaces, hot concrete roads and cooled cushioned vehicles.

On the second day we walked down Lohdi road, feeling the shock of the afternoon sun, and took a left toward the main gate of Lohdi Garden, where we joined the climate strike. With around a 100 protesters we staged a ‘die in’ – the symbolic act now characteristic of the global climate strike movement. I lay there, staring up at the tree branches above kindly offering shade from the sun, feeling the sweat seep into my clothes and questioned my right to be there, to be part of this.

Silently carrying this contradiction, I moved with the growing crowd – chanting, singing, clapping, beating drums. Speeches flowed in Hindi and English, anti-patriarchy signs were held up above the crowds and the right to breathe was demanded, emphasising the visceral politics of place, keeping us grounded on the streets of Delhi through which we walked.

Me and my friend separated, and met again. I felt torn by the need to remain with the moving, growing, dancing crowd and a strange, irritating sense of responsibility to return to the conference.

We slowly walked back to Lohdi road, watching the crowd pass us, mingling with the traffic, towards the already sinking sun. Guilt welled in my stomach, as the last protesters passed us. Entering the Indian Habitat Centre, cooling pools of water greeted us as we moved through security, on to the carpeted floors, into the air-conditioned, curtained but brightly lit room; where we finally sat, confronted by a powerpoint glaring at us through multiple flatscreens. Sweat soaking through my kurta, my face and arms coated in dust, I sat, barely listening, mindlessly watching the screens change, consumed by the consistent unease I feel inhabiting such conflicting spaces.