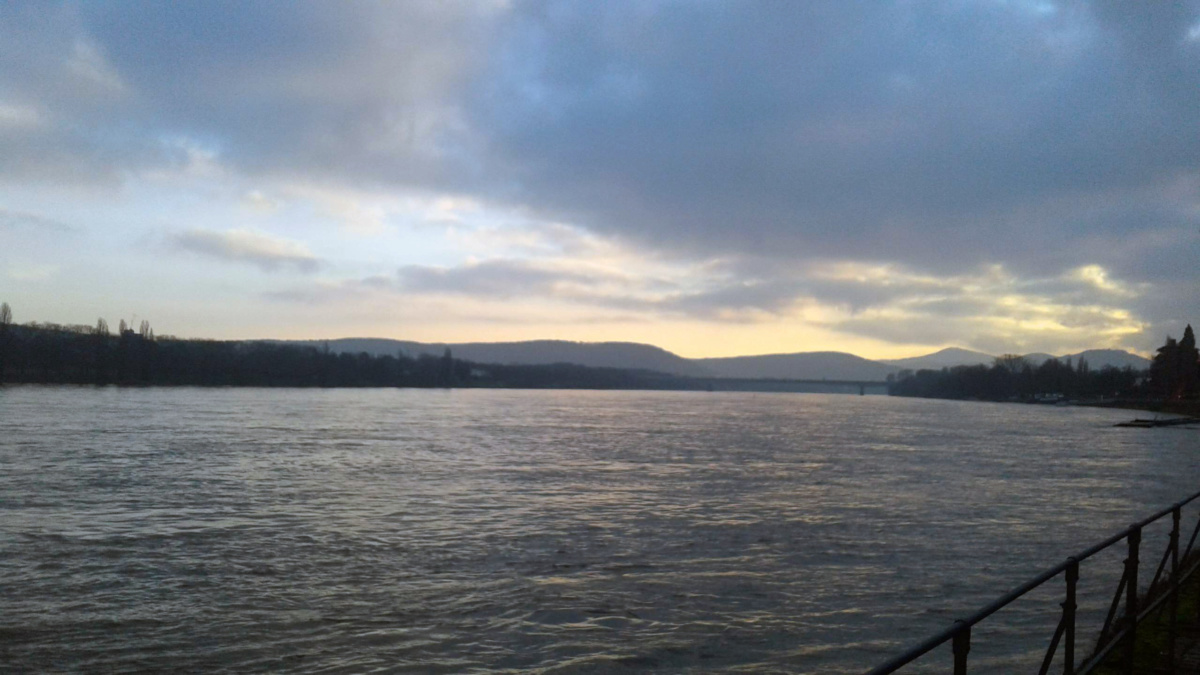 The Rhine in Bonn. Photo by Enid Still

“How do we know the world?” It is a difficult and multi-layered question. Yet it enticed us, two colleagues, women from the global north and south respectively, to collaborate and reflect upon our journeys as researchers, activists and now as fellow PhD students. Reflection upon our experiences, Enid as a researcher in India and Mai as an activist in Indonesia, brought together very particular understandings of the intimate power relations between the participant and researcher – how power manifests, how it is inscribed upon our bodies, and how people resist or attempt to counteract power in different ways.

This reflection, on what Haraway (1988) calls ‘situated, embodied knowledge,’ has led us to an engagement with the politics of care discussed by Joan Tronto (2015), not only as alternative feminist economic theory, but as a praxis towards re-orientating our methods of ‘knowing the world.’

This collaboration encouraged us to look critically at the nature of the power inherent in the participant-researcher dynamic, addressing its intersectional and culturally contingent dimensions. Furthermore, it has challenged us to look again at the potential limits of reflexivity in this process. Can reflexivity as a methodology achieve a reconfiguration of power within the researcher-participant dynamic, or does it risk becoming an indulgent process of critically examining the self?

The post-colonial realities of the places in which we both work are experienced differently because of the identity markers inscribed upon our bodies, thereby affecting the experiences of the people with whom we work. Not only therefore is the power inherent in the participant-researcher dynamic culturally contingent upon the place where we work, but also upon the intersectional positionalities of our own bodies. It cannot be disentangled from these messy realities, indeed to do so would be to ignore the very presence of what we are searching for – resistance. As Foucault (1978:95) famously stated “where there is power, there is resistance” and yet he reminds us that the inscription of power upon our bodies through our socialisation, governmentality and imperialism is impossible to detach ourselves from.

Whilst living and working in India, Enid experienced the the epistemic asymmetries inherent in research predominantly in the field. The socio-political context combined with the identity markers inscribed upon Enid’s body (gender, ethnicity, class), to create inescapable tensions and inequalities. In regards to representation in the knowledge production process, these tensions were made particularly evident when investigating potential field sites and communities for her masters research in Pune. During this process, the power asymmetries felt so stark, almost unsurmountable, that it led to a complete reorientation of the analytical lens – from looking at the everyday life of citizens to the everyday life of NGO workers specifically. This didn’t necessarily solve the issues but it helped the researcher to adopt a collaborative approach, embedded in applied anthropology methods, whereby she could attempt to mitigate the power asymmetries in the researcher-participant relationship.

Understanding these power asymmetries in the Indonesian context has been shaped by the long-standing experiences of Mai as an environmental activist in a civil society movements. Mai’s positionality as a woman highlighted the power relations inscribed upon her body that determined the ability to enact her agency as a political activist and scholar. This positionality however, also increased sensitivity to often ‘unseen’ forms of resistance by women (Scott, 1986). To understand this resistance through an intersectional lens, Mai used the method of photovoice with two neighboring Indigenous communities affected by nickel mining in Sorowako, South Sulawesi, Indonesia. Photovoice is grounded in feminist theory and praxis in that it uses documentary photography as a visual method to acknowledge and make visible women’s subjective everyday experiences, thus informing action based on lived experience and moreover, it enables a shift of power to the research participants (Ciolan and Manasia, 2017; Hernandez, et al., 2014). This method enabled Mai and her colleagues to understand how the Sorowako and Karonsie Dongie communities had become divided since the giant nickel project began operation, and how people’s everyday activities, such as storytelling, false-compliance and tapping electricity, are indeed a forms of resistance (Gynn & Maimunah, 2018).

This is why we argue for the politics and praxis of care as an approach to knowing the world. Making a distinction between ‘caring for’ and ‘caring with,’ Joan Tronto (2015) calls for a mutual care through an inevitably mutually entangled experience. Critically addressing the systemic value systems that underpin the injustices and inequalities of ‘care work’ in the dominant economic system, Tronto (2015) argues that a politics of care opens us up to both a theoretical re-orientation of ‘value’ but also a political and ethical praxis in academia and beyond. Her notion of ‘care’ as something learned in a particular time and place rather than something inherent to particular people because of their gender or ethnicity, demonstrates the possibilities of cultivating this praxis as both a theoretical framing and in the practical negotiations of research to mitigate the power structures within. These negotiations also enable us to look beyond reflexivity as an indulgence of the self (of the researcher) but rather a process of patient dialogue between actors, where reflection operates beyond the written word and into a collaborative space of deliberation, tension and ultimately co-production of knowledge (Nightingale, 2016).

Orientating our research within a politics and praxis of care and embodied, situated forms of knowledge production, enables us to reflectively and collaboratively engage with the power inscribed within place and upon bodies (Escobar and Harcourt, 2005). We argue that continuously and collaboratively negotiating the inescapable tensions and inequalities that shape the participant-researcher dynamics offers a method of resistance and one pathway towards the decolonisation of thinking (Mignolo, 2007). Critical reflection, collaboration and a re-orientation of notions of ‘value’ in relation to knowledge, therefore lies at the root of challenging these asymmetries of power. The inscribed nature of these power relations however, must not deter us but embolden us to look deeper. By doing so we can search for tactics of resistance and alternative methods of research, such as photovoice , thus destabilising the historic and situated power dynamics that entangle us all.

Enid is a social anthropologist pursuing her PhD in Feminist Political Ecology (FPE) at Passau University, Germany. As part of theWEGO ITN she is one of fifteen scholars working to develop the discipline of FPE and bridge the gap between activism and scholarship. Her current work focuses on the politics of food, care and agrobiodiversity in Chennai, India.

Siti Maimunah is a scholar-activist from Indonesia. Her early career began in the year 2000 with JATAM (Mining Advocacy Network) where she has developed her knowledge about women and mining issues. Currently, she is PhD researcher within WEGO ITN where she works on feminist political ecology of mining on gender and ethnic identities in Kalimantan, Indonesia.

This blog was written as part of the one-day workshop titled ‘How do we know’ the World?’ held in January 2019 and organised by the EADI Working Group on “Post- and Decolonial Perspectives to Development” in Bonn. It was originally published on convivialthinking.org