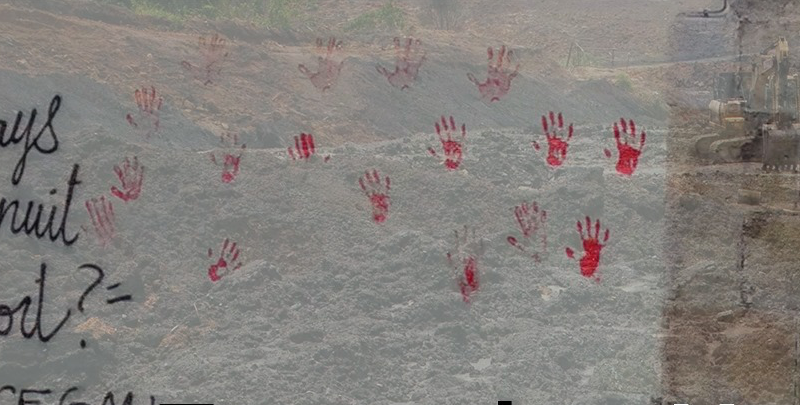 Creative practices are central to activism on the front lines of resistance against forces that are changing the skin of the planet. Viruses don’t stop machines, and extractive practices continue despite the current pandemic, affecting organising and creating. How do creative engagements on the front lines continue in a pandemic? How does COVID-19 emphasise the importance of continued acts of solidarity and resistance? What are ways of continuing the ‘doing’ but also new ways of ‘not doing’ or ‘doing differently’?

In anticipation of the launch of Extracting Us, an online collaborative exhibition and conversation, artists-activists-scholars will share their experiences of doing this work: Tracy Glynn, participatory action researcher studying at the University of New Brunswick in Canada, Edgar Xakriabá, Denilson Baniwa and Jaider Esbell, independent artists and activists based in Brazil, Negar Elodie Behzadi, Lecturer at the University of Bristol working in Tajikistan, and Daiara Tukano, independent artists activist educator and researcher based in Brasilia Brazil (TBC).

Katy Beinart from the University of Brighton will then host a discussion with Persephone Pearl, co-director at ONCA Gallery in Brighton, Jamille Pinheiro Dias, Research Associate at the University of Manchester, and Wendy Harcourt, Professor of Gender, Diversity and Sustainable Development at Erasmus University in the Netherlands.

The webinar will finish with 25 minutes of questions and discussion with participants, who will also be invited to contribute actively during the event.

Free event, places are limited. Sign up at: https://www.eventbrite.co.uk/e/creative-engagements-on-the-front-lines-tickets-107840738552

The Extracting Us exhibition and conversation series are being co-curated by Siti Maimunah, Elona Hoover, Alice Owen, Dian Ekowati and Becky Elmhirst.

This project has received support from ONCA Gallery, the Centre of Spatial, Environmental and Cultural Politics at the University of Brighton, WEGO-ITN European Union’s Horizon 2020 research and innovation programme under the Marie Skłodowska-Curie grant agreement No 764908. We are also grateful for the collaboration of members of The British Academy funded project ‘Sustainable’ Development and Atmospheres of Violence: Experiences of Environmental Defenders.

Extracting Us. Creative engagements on the front lines

At the High Courts of Justice in London where campaigners challenged the decision to allow 20 years of oil production. All images: Alice Owen

The Horse Hill oil production site in Surrey in the South of England, on the surface, takes up only a couple of hectares and is mostly obscured from view behind the leafy woodlands and blossoming hedges of the English countryside. But beneath the surface its wells extend vertically and horizontally for kilometres, penetrating the underlying clay and shale formations to extract oil millennia in the making. The first strata to be drilled through is Weald clay which will contain the isotopes that signal the nuclear reactions which have been declared as an indicator of the Anthropocene; the combustion of the fossil fuel beneath and the ensuing climate change will leave their own geological traces of this age of extractivism.

Extractivism, as I have come to understand it, is a relation that refers not only to such literal acts of the extraction of natural resources for the accumulation of wealth, but also to the asymmetrical flows of power and knowledge resources between people. The history of the social science research is one of extractivist research practices; Anthropology is particularly populated by researchers guilty of exploiting cultural differences with a one-way flow of knowledge accumulating as academic prestige. Thus it is my challenge as a researcher of extractive industries to ensure my research does not replicate extractive relations with the communities I am researching with.

So what does researching extractivism beyond extractive methodologies look like? Guiding words for me are those of Indigenous Idle No More activist Leanne Simpson who, in an interview with Naomi Klein, states that “the alternative to extractivism is deep reciprocity. It’s respect, it’s relationship, it’s responsibility, and it’s local”. This idea of deep reciprocity also resonates with Donna Haraway’s invitation in her book Staying with the Troubleto cultivate care-full engagements and response-ability, or the capacity to acknowledge and respond in caring ways to injustices inflicted on human and nonhuman others towards ways of living well together.

In practice, this means avoiding the type of research where the researcher simply arrives, extracts the relevant information from interlocutors, leaves without any further contact and assimilates the information into their research publications. Rather, I am adopting an approach of slow ethnography and of active participation with the community campaigning against the continued production of oil at Horse Hill and the expansion of the industry across the region. This means not rushing into interviews, but first spending time becoming acquainted with the community and participating in events and meetings not only as ethnography but as a way of enacting solidarity with their campaigns. This comes with its own challenges, such as the awkwardness of always being The Researcher in the room and feeling that there is always more I could be doing to help with the enormous amount of work that has to be done rather than ‘just’ doing research about this work. However, as I gather knowledge of the campaign through my various research practices, I am increasingly able to contribute to meetings and events.

As a way of giving to as well as receiving from the campaigning community, I have worked together with ceramicist-activist Xanthe Maggs to offer creative workshops with Weald ‘Anthropocene’ clay we have dug from near the Horse Hill site. The act of digging the clay has been an opportunity for care-full engagement with the landscape, and an invitation to think through what distinguishes extractivism from other forms of gathering and creating with natural resources.  We were able to organise the first in a series of workshops before the Covid-19 outbreak, inviting those interested in the Horse Hill campaign for an afternoon of making with the clay inspired by reflections on the Anthropocene and using natural objects such as fossils and leaves as desired. The conversations and activities we shared in the workshop were both convivial and emotional – different from those that happen in other activist spaces such as meetings, protests or the courtroom. The campaigners expressed their appreciation for this regenerative gathering where we got to share our stories and concerns with one another whilst being creative. Community engagements with clay will continue to be developed for the upcoming Extracting Usexhibitions online and at conferences, offering a space to share the story with wider stories of contemporary extractivism from a Feminist Political Ecology perspective.

Through these research engagements, I am uncovering different forms of extractivism that oil production is taking in Surrey. By choosing to research in my home country, I find I am more open to understanding these nuances. Here in the UK extractivism looks very different to elsewhere, largely due to our histories of colonial violence and the outsourcing of extractive industries to parts of the world with environmental and social protections less stringent than ours. Navigating these histories and my positionality are, in part, why I was attracted to this PhD project rather than those situated elsewhere. My familiarity with the culture and context means I am more easily able to become integrated with the communities, and allows me to foreground in my research how resisting the extractive industry demands substantial environmental and social resources of the affected communities in ways that are pervasive, personal and political.