The Dutch edition of our Feminist Political Ecology Dialogues happened on May 17th 2022, in Wageningen, focusing on age, generation and population. Organized by and based on the interests and research of three WEGO PhDs candidates –  Constance Dupuis (ISS), Milja Fenger (ISS) and Nanako Nakamura (WU) – the event wanted to bring  different, but equally essential, discourses around life-making into the Feminist discussions about care, everyday practices, climate discussions, and social reproduction.

In part, it did so by showing the researcher’s cases and approaches, while evoking questions and discussions from the participants. The PhDs shared a similar standpoint of critical view on normativity, inspired by situated own notions and experiences. 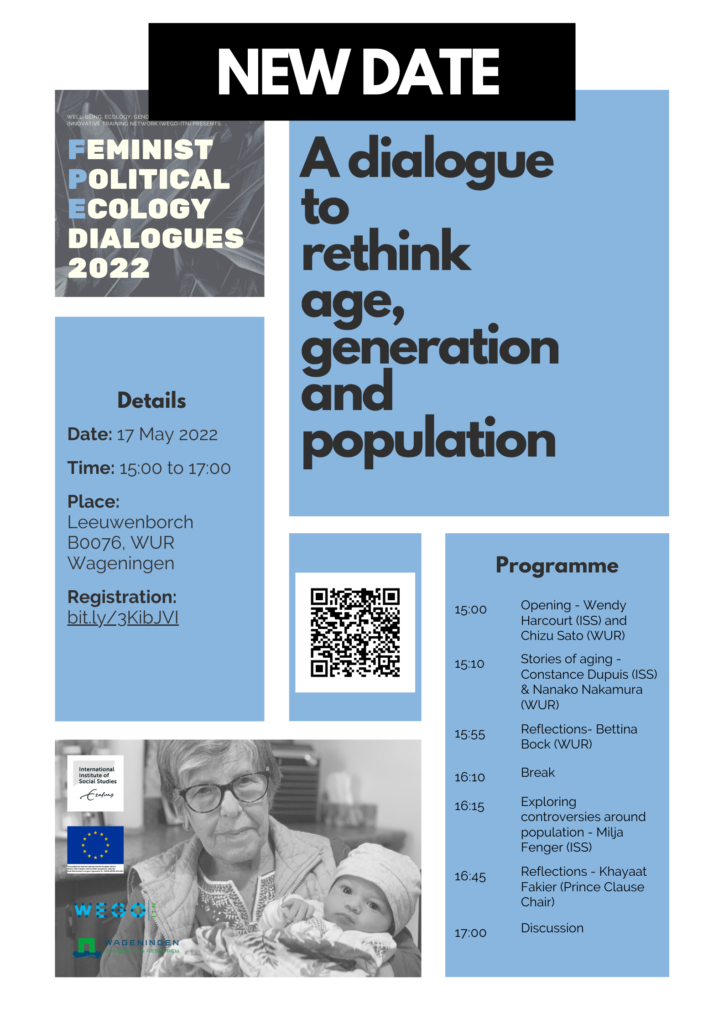 The first session, “Stories of Aging”, conducted by Constance and Nanako, centered on FPE’s intersectional thinking and the resistance against simple binary to see gendered and aging practices as relational construction of social differences. Both Nanako and Constance used socionatural understandings of the people/place intersection though the meanings presented in Japan and Uruguay.

The second session, “Exploring Controversies Around Population”, by Milja, paid attention to the everyday, to the embodied, to emotions. Milja focused on how FPE methodologies do not recognise the written text as the only or primary means of conducting knowledge production – and how FPE is able to be “performed” in multiple ways including through experimentation with art and creativity.

Despite sharing the understanding and FPE’s perspective, the three PhD researches are distinctive in terms of context, methodology, and research question. The multiplicity in FPE application contributes to diversifying the approach and the theoretical grounds of the Dialogues.

With this notion in mind, WEGO-ITN PhDs can start looking at what makes a new way of living, unraveled not through relying on the popular notion of anti-aging or regeneration of the population, but through relating to different bodily experiences as an ethical approach (Nanako’s work).

In the second session, the FPE dialogue complicated questions by looking into the relationship between art and research and how methodologies from the former can be used in the latter. Milja Fender suggested that research on environmental justice would do well following the developments in wider academia around the use of creative methodologies in research, but that careful thought around what counts as research outputs are necessary.

The Dialogues were open to everyone interested in joining, so as to invite more people to conversations about FPE, and our interests around age and population. The organizers used mailing lists, personal contacts, and social media, e.g. Twitter and Facebook, to share the event announcement.